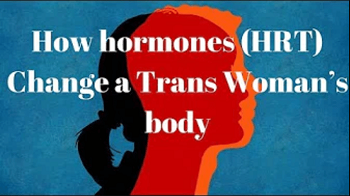 If you’re a newly out trans girl or maybe just an AMAB (Assigned Male at Birth) person who is questioning their gender, you’re probably wondering what results you can expect from hormone replacement therapy or HRT.

I’m here to round up everything you can expect to change about your body if you start on hormones.Obviously, some standard disclaimers are going to apply here.

Number one; that your mileage may vary

this is super important to remember every time you watch someone six-month hormone update or here about how this other girl got c-cup boobs.

Everybody is different. Just because hormones affected someone else in a certain way, that doesn’t necessarily mean they’ll affect you in the same way.

They’re going to happen over months and years. There will be changes, but you’ll have to be patient and

number three; hormones will probably help with your dysphoria, but they probably won’t completely get rid of it.

Again, your mileage may vary, but hormones are often only one step to alleviating dysphoria they can be a significant and necessary step, but you may be setting yourself up for disappointment if you expect HRT to fix everything.

Well, in a non-trans context, hormone replacement therapy is commonly given to older cis women (not trans) to alleviate their symptoms of menopause.

That’s right, even CIS people take hormones sometimes in Fact, it’s common but in the trans Context, HRT is prescribed to trans women or non-binary AMAB people who feel that HRT would help them.

For these folks, often referred to as trans feminine people, their endocrine system the place that makes their hormones, is putting out too much testosterone and not enough estrogen so HRT changes that.

There’s a whole complicated process that trans people must go through to get prescribed HRT depending on where you live that I personally think is convoluted, unnecessary, and gate-keepy but we’re not going to get into that now since we offer ways of getting hormones on our website.

This is just about the changes it will have on your body.

So, hypothetically, you just started HRT, what’s going to happen?

The most major change that you’re probably going to notice the earliest is, your brain. Hormones will likely change the way you feel, how you handle emotions, and even just your general mood.

The psychological changes themselves can be huge, and just the act of starting HRT, and being on a path to transition can often be an immense relief for trans feminine folks.

it’s not going to fundamentally change who you are or anything, but it can make you feel a lot more balanced.

Next, a lot of trans girls worry about body hair and facial hair.

The unfortunate answer here is that while HRT may eventually cause some of your body hair to get a bit thinner lighter and softer it’s not going to completely eliminate your body hair.

Check out www.hair-removalpro.com to find out different methods of hair removal

CIS girls have body hair too and once there’s hair growing in a place, it can be difficult to permanently remove it. And for facial hair, hormones probably won’t affect that at all.

For facial hair or body hair that you want to get rid of, you’ll have to look into options like laser or electrolysis and creams. Obviously, you don’t have to want to get rid of this hair body hair is a completely natural thing for people of all genders but it’s understandable if you find that stuff dysphoric

One change you can definitely expect to see,

though it may take a while, is the rounding out and softening of your features.

This will happen slowly, and it will be subtle, so it’s going to be hard for you to notice since you see your face and body every day but it’s definitely happening.

This is because higher levels of estrogen tend to make you have a thicker layer just underneath your skin that softens your features and makes everything a little less angular.

Speaking of skin, yours is probably going to get a good bit softer and a bit thinner. Hormone may even change how you experience touch, making you a little more sensitive to everything you physically feel.

every subtle you’re not going to have like a spidey sense or anything but they’ll be there. The skin on your face is also going to produce a lot less acne, which for many is a welcome change but remember to moisturize because hormones can also dry out your skin!

Thankfully you’ll probably be sweating a little less, and while your body odor will still be stinky, it’ll probably smell a bit different.

One very noticeable physical change is going to be the development of breasts. 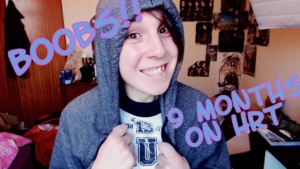 Most trans women don’t get very large breasts, though some do. This can vary wildly, and even though you’ll probably start feeling and noticing the growth right away it can take years to complete.

You’ll likely have sore nipples and start to notice breast development within a few months.

You’re probably going to feel weaker and just generally different. You can still exercise and gain muscle, but as your body adjust to the new hormones, it will likely be a noticeable change in strength. Plus, your endurance and stamina will likely drop initially as well, since you will have fewer red blood cells transporting oxygen throughout your body.

In general  you’ll need to be sure to stay well hydrated and nourished to help your body adjust to the changes. So, you’ll also probably have some salty cravings.

That’s because the main testosterone blocker that folks are often prescribed also makes your body absorb less sodium– so to make up for that your body is going to crave salt.

Lots of trans women develop a fondness for pickles,

but olives, instant ramen, and other salty foods can also help with cravings. Just remember that salt isn’t evil and if your body is craving it it’s likely because you need it it’s totally okay for you to eat all the salty things.

Alright I guess it’s time to talk about genital stuff

One of the major things to be aware of is that your body is going to stop producing sperm, and this change will likely become permanent after just a few weeks or months on HRT.

That means you won’t be able to have biological kids, at least not with the medical technology we havenreadily available right now. So, if biological children are something you might want, that’s something to be aware of, and you might want to look into potentially freezing your sperm before starting HRT, though I know that can be super expensive, and is definitely not accessible for everyone.

Lots of trans women report having a lower sex drive, while others don’t report a difference, and some say that it actually raises their sex drive because they feel less dysphoric.

One common thread among trans women, though, is that it will generally change how you experience sex and orgasms. This is one of those areas where everyone reports something different, so you can’t really know how it will change your experience of sex until you’re on HRT.

Obviously, that’s not everyone, tons of people experience the same attraction before and after, but it is something that more than a few trans women have experienced.

find it more difficult to get an erection, and they experience some pain when you do have erections.

That doesn’t mean your sex life will end, though- there are plenty of ways you can have sex that don’t involve being erect, and as I mentioned earlier, your entire perception of sex will probably shift in significant ways.

Now let’s talk about your bones

The most part, they’re not gonna change. HRT won’t make your ribcage smaller or your shoulders less broad. And it won’t change the bone structure of your face.Your hips might change depending on how old you are when you start hormones.

A person’s hips start to fuse after puberty but take a few years to complete, so if you start HRT in your late teens or early 20s, it is possible that your hips could get a little wider.

There are no promises..

….and it’s not the end of the world if you’re transitioning later, but it is a possibility for younger folks.

Don’t worry though, transitioning has a massively positive affects regardless of what age you start out.

HRT isn’t going to change that at all, but you can learn to alter it with voice therapy. Testosterone makes your vocal cords thicker, which isn’t an easy process to undo.

On an important health related note, you’re going to be more at risk of blood clots which are not good. To avoid getting those it’s important to exercise regularly and never stay seated for more than a couple hours at a time.

Always get up and stretch if you’re working at a desk and take frequent walks in the aisle if you’re on a long plane ride blood clots are nothing to mess with but with proper care you’ll be totally fine.

if you’re feeling weird through all this that’s completely normal, your body is going through a second puberty so it’s understandable that things might seem a little wonky at first.

And I know I said this in the beginning but I’m going to repeat myself; your mileage may vary.

Just because you heard that X happened to some trans girl on the Internet that doesn’t mean that X is going to happen to you.

Every person’s body is highly individual, and hormones are never going to have the same effect on two different people.

These things apply to both CIS women and TRANS women. There’s no such thing as a singular “female body”. if you’re a woman sis or trans you have a female body….

…but I know that that reassurance alone isn’t going to get rid of your dysphoria so do what you got to do to alleviate your dysphoria.

just remember not to get caught up in the endless quest of chasing a perfectly “female body” because there is no such thing.

If you’re looking into HRT,

or just getting started on it, I really hope that it works out well for you. if you’re currently unable to get on HRT I want you to know that you’re not alone there are other trans girls out there and your exact position too and things will be okay lots of people are out here fighting to make HRT more accessible every day I really hope and believe that you’ll be able to access the care you need one day in the meantime you’re still a badass woman who’s just as valid as any chick on HRT.

I’m Writing this as an educational resource for trans girls and questioning folks out there but it is not about my personal experiences, that’s all I had for you today.

Any cookies that may not be particularly necessary for the website to function and is used specifically to collect user personal data via analytics, ads, other embedded contents are termed as non-necessary cookies. It is mandatory to procure user consent prior to running these cookies on your website.