Every single person manufactures several varying hormones in differing amounts in their bodies. 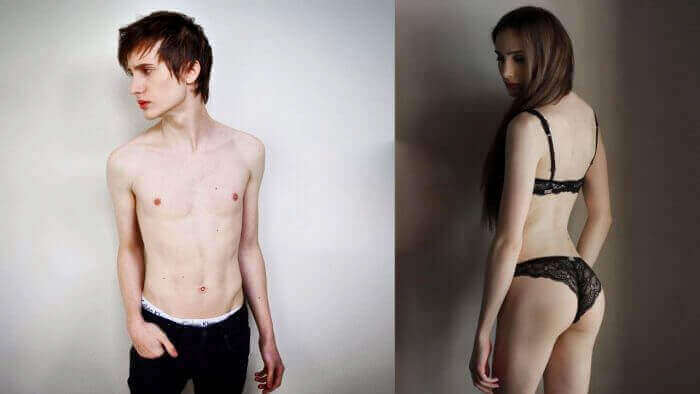 Sex hormones like androgens and estrogen, control the development of sex characteristics including the sex organs that form before we are born and the sex characteristics that typically progress at puberty:  a deeper voice, facial hair, increased body hair, more muscle mass etc. for “males” and a curved body shape with increased fat on the hips, buttocks, and thighs, breast development etc. for “females”.

Typically, because “males” are inclined to have higher androgen levels, while “females” tend to have higher levels of estrogen and progestogen, endocrine glands secrete hormones in microscopic quantities. Still, it takes a tiny amount to bring about considerable changes in the body.

These hormones travel through the whole body in the bloodstream and only affect specific cells designed to receive their messages.

Often, in past times and even now, when people’s hormones were out of balance, they turned to hormone replacement therapies (HRT) to ease their symptoms because even the slightest shifts can have a significant impact on one’s health and well-being.

Today, hormone replacement therapy is an option commonly used to help transgender people feel more comfortable in their bodies. However, not every transgender person suffers from gender discomfort and seeks medical intervention.

For some, social change can be enough, or physical intervention may not be convenient or fitting.

Cross-sex hormone therapy is a type of hormone therapy where sex hormones and other hormonal drugs are given to transgender or gender-neutral persons to more directly match their secondary sexual features with their chosen gender identity.

Some of these medications are also hormones, and some are a different type of chemical. The HRT can be for feminization estrogens and antiandrogens or masculinization (androgens).

Some intersex people also use hormone replacement therapy, either in childhood to validate the sex they were given at birth, or later to align their sex with their gender identity.

Non-binary or genderqueer people could undergo hormone therapy to attain a preferred balance of sex. The best type of HRT depends on your health, personal preference, and what you need to get out of the treatment.

The goal of male to female (MTF) hormone replacement therapy:

is to raise estrogen concentration and to lower testosterone concentration to keep both levels in the standard, physiologic female range.

The effects of testosterone, such as coarse body hair and facial hair, are reduced, and female secondary sex characteristics such as breast and hip development, are induced.

This necessitates an inhibition of androgens and the addition of estrogen. The Endocrine Society guidelines for transgender women include estrogens in addition to androgen-lowering medications.

Such a treatment has anticipated physical changes, like slowing of body and facial hair growth, fat redistribution in the female shape, and boosted breast growth.

Taking estrogen has powerful physical feminizing effects. This is caused by the estrogen’s direct influence on estrogen receptors and also the indirect suppression of testosterone production.

Typical changes from estrogen vary amongst individuals. Typically, in the first one to three months, the following changes can be noticed after using an estrogen booster like Estro Surge:

Then gradually, in a timeline of one to 3 years, the following changes may be observed:

Gradual changes taking place could be:

Most of these changes are reversible if medication is stopped, except maybe for breast growth and sterility.

Male to female hormone replacement therapy also has significant psychological effects. It eases gender dysphoria by bringing the mind and body closer and helps people feel confident about their bodies.

Reports show that people who had gender dysphoria often expressed being less anxious and depressed, calmer, and happier after they started taking hormones.

Some experience this psychological change as soon as they start taking hormones; others experience it as physical changes happen.

Natural Hormones To Help Transitions From Male To Female: