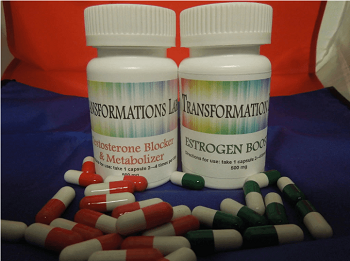 I was on transformations labs Estro-surge estrogen for six months before starting an antiandrogen (Testo-Rid Testosterone Blocker).

While on estrogen-only, not much happened. My testosterone levels were slightly reduced, but my estrogen levels entered normal female ranges.

A month after starting on both (Estrogen and Tblocker), I felt a small hard, painful lump by my right nipple. Over the following weeks, the lump got bigger and started forming a crescent extending around my nipple.

A second lump formed by my left nipple and followed the same pathology. These lumps were breast buds.

By the time I had my next blood test and endocrinologist appointment, approximately four months later, the lumps were circular and extended underneath each nipple. The skin was starting to rise as the breasts started growing.

The only other effect that I noticed was that it could be attributed to the hormones that were a mood change that lasted approximately three weeks after starting to take testo-rid. I got grumpy easily.

I didn’t recognize the cause until after the fact due to coincidental work pressures. It was only later, looking back, that I was able to see that the change in mood was not actually due to stress from work.

Any other effects from the antiandrogen and estrogen will be more subtle and take longer to become apparent. Breast development was the primary sign that the hormones were working.