Estrogen and testosterone are found in both men and women, in different concentrations. An imbalance of one or both of these hormones can have significant physical and psychological consequences and can be caused by illness, medications, tumors or, occasionally, genetic 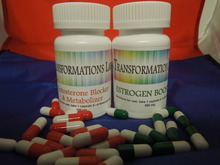 predisposition. Women who have low levels of the hormone estrogen are at high risk for high female testosterone levels, although the two can also be mutually exclusive. Treatment for a hormonal imbalance can include prescription medications and certain natural herbs may also help restore balance.

Dong QuaiDong quai, also known as the female ginseng, is used to treat several different disorders of the menstrual cycle. These include symptoms of menopause, which is the gradual cessation of a woman’s menstrual cycle. According to the University of Maryland Medical Center, dong quai may act like estrogen in your body, although further research is needed to determine whether this is accurate. Dong quai is used in traditional medicine to restore balance to the hormones, restoring the cyclical nature of the menstrual cycle. This herb is considered safe to use but should not be administered to children or pregnant women. 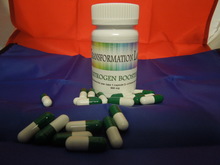 the menstrual cycle. According to the UMMC, black cohosh may act like estrogen in your body and is purported by some women to be an effective treatment for hot flashes. As a phytoestrogen, black cohosh may also help reduce bone loss that is related to estrogen decline in menopause. At least one research study cited by the UMMC found that black cohosh may have a protective effect against breast cancer. If you have a family history of breast cancer, however, check with your doctor before using black cohosh.

LicoriceUnlike the candy of the same name, the herb licorice is used topically for conditions such as eczema and internally to clear mucous congestion. Additionally, licorice appears to have a significant decreasing effect on blood levels of testosterone. A 1999 study published in the “New England Journal of Medicine” found that men who consumed licorice root that contained the active ingredient glycyrrhizic acid had significantly lower testosterone levels than men who didn’t consume licorice root. Glycyrrhizic acid can cause serious unwanted side effects, according to the University of Maryland Medical Center. This is why licorice is also available in a deglycyrrhizinated version that imparts different effects. Check with your doctor before using any form of licorice.
​
Saw PalmettoSaw palmetto is a member of the palm family and is used to decrease inflammation, treat conditions of the prostate gland and, subsequently, promote urination in men. According to Memorial Sloan-Kettering Cancer Center, saw palmetto has also been found to decrease the uptake of testosterone in the body and may also impair the conversion of testosterone to dihydrotestosterone. These effects are likely attributed to natural antiandrogenic effects, which block the actions of testosterone in the body, According to Memorial Sloan-Kettering Cancer Center. Saw palmetto may act as an anticoagulant in your body, so if you have a preexisting bleeding problem or are taking blood-thinning medications, check with your doctor before using this herb. by MAURA BANAR livestrong.com